I love this mural

"This is How We Live" Mural detail
(c) Garin Baker

I dig mural art. Always have. Howard University was briefly graced by some impressive mural art in the late 60s-early 70s: Eugene Edaw's epic Frederick Douglass piece on Cramton Auditorium, James Padgett's muscular red, white, and black pieces at either side of the Fine Arts bldg. and a piece on the side of Ira Aldridge Theater by an artist unknown to me. I think James Phillips may have had an Africobra mural on Cramton too for a time. And of course there was Ron Anderson's mural on the wall of the original Howard University Punch Out restaurant (from his student days before he evolved into Akili Ron Anderson).

above the place where the old lefty-hippie-veggie restaurant 'Food for Thought' used to reside. 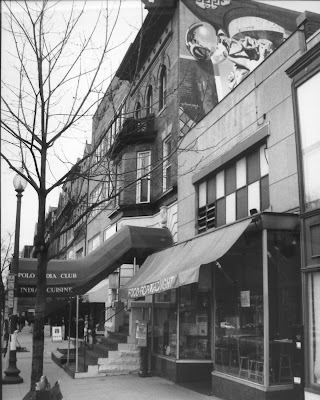 Now I've found a new favorite mural in LeDroit Park at the corner of 3rd and Elm, NW, right up the street from Slowe Hall, the Howard University dormitory where I once lived.

It's the work of artist Garin Baker, a New York artist with a studio called Carriage Art which (according to its website) executes mural art on commission. He works in the tradition of the New York Realists and the depression-era WPA muralists.

This one is called "This Is How We Live," an idyllic photo-realistic scene behind the fairly recently erected LeDroit Park arch at 5th and Florida Avenue, NW, across from the Howard Theatre. His is an idealized vision of the newly gentrified LeDroit Park area just south of Howard University with the U.S. Capitol building in the top center, Howard University's Founders Library imbedded above to the left, and four beautiful Black children smiling beatifically from the upper right, all tied together with the banner imprinted with the title "This Is How We Live."

I like the way Baker breaks up the realism of his work by incorporating squares of intentional simulated pixelization , acknowledging the artifice inherent in any work of photo-realism. This is the only mural of the many displayed on his website in which he does so. Interesting. The piece is copyrighted 2008 but I first happened upon it and photographed it in January 2009. Baker was born in 1961 which makes him a relatively young 48. He's a former illustrator (like Norman Rockwell and Andrew Wyeth) and it shows, which is not a knock on him (or them).

He has created other murals in DC, as well as in New York, Atlanta, and elsewhere throughout the U.S. I also really love the piece he created for the Turkey Thicket Aquatic Center in Brookland Northeast DC. This piece is so kinetic it exudes an almost comic-book sensibility though it fiercely maintains Baker's penchant for hyper photo-realism.

Email ThisBlogThis!Share to TwitterShare to FacebookShare to Pinterest
Labels: "This Is How We Live, DC, Garin Baker, LeDroit Park, mural, photo-realism

I went to a talk today in Chicago at the South Side Community Art Center where Barbara Jones-Hogu (a member of AfriCobra, a rare female member) showed her recent silk screen print. We were talking about the black mural movement, the goals of AfriCobra and the Wall of Respect that was in Chicago...Think you would have enjoyed the conversation.

Dr. F.
I have been a professional photographer in DC for over thirty years, and for the past several years, an adjunct college professor as well. I teach courses in photography, photo history, and film appreciation. I have always been opinionated, yet I have always tended to cede the soapbox to those with a greater compulsion to use it. That said, I was reading Esther Iverem's excellent new book on Black people in film called "We Gotta Have It" in which she says something to the effect that we all have just as much a right to our own voice as anyone and maybe more, and it really resonated with me. It is in part to help me hone my voice that I have started this blog. The other part is to have a place where I can share some of my photos and get some honest feedback about them. As an artist, I've always sort of acted in a vacuum, but I've come to realize, belatedly, the importance of getting feedback regarding my work.